This website is currently showing content in English. You can select a different region and language at the site's top left corner.

The environmental impacts of mining operations are currently a major focus of attention. The traditional flowchart of gold ore processing involves the use of cyanide solutions, and generates cyanide-containing tailings.

There are many methods which achieve the destruction of cyanide in tailings. In many countries, the limits of environmental impact are established for industries. In addition, international conventions such as the Cyanide Code impose limitations. Post-USSR standards known as the Maximum Allowable Concentrations are still valid within many CIS countries including Russia, and are among the most stringent standards in the world.

Along with free cyanide, current Russian standards establish criteria for thiocyanates, which are not regulated in most countries. These rules apply rigorous requirements to the cyanide destruction cycle. Some methods commonly used all over the world are rarely used in Russia.

One such method is the INCO process (shown in the list of cyanide destruction methods in the table above), which does not decompose thiocyanates completely. Extreme climate and complicated logistics limit the use of the method based on Caro’s acid. Practically all operating and planned production facilities in Russia use the method based on sodium hypochlorite, but this method imposes significantly higher operating costs (see graph below for comparative costs). 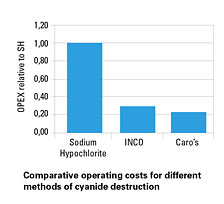 Alternatively, a combination of methods can be used, similar to those used at the Julietta and Kubaka mines in Russia. Using closed water circulation at the processing plant reduces the cost of dewatering. This approach can also help reduce operating costs (see breakdown of consumable costs in figure below). SRK performs audits of operating facilities and facilities still under construction for compliance with the International Cyanide Management Code requirements, and plays an active role in promoting alternative methods of cyanide destruction. 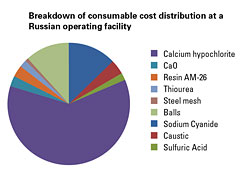 Does an open pit lake represent a toxic threat to wildlife after closure?